ActiveCampaign's category-defining Customer Experience Automation (CXA) platform helps over 130,000 businesses in 170 countries meaningfully engage with their customers. The platform gives businesses of all sizes access to hundreds of pre-built automations that combine email marketing, marketing automation, CRM, and machine learning for powerful segmentation and personalization across social, email, messaging, chat, and text. Over 70% of ActiveCampaign's customers use its 300+ integrations. 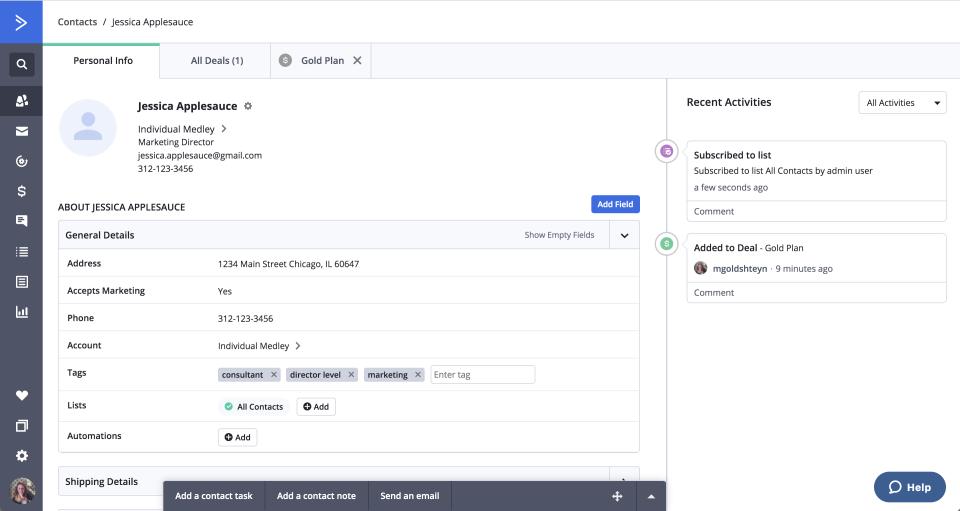 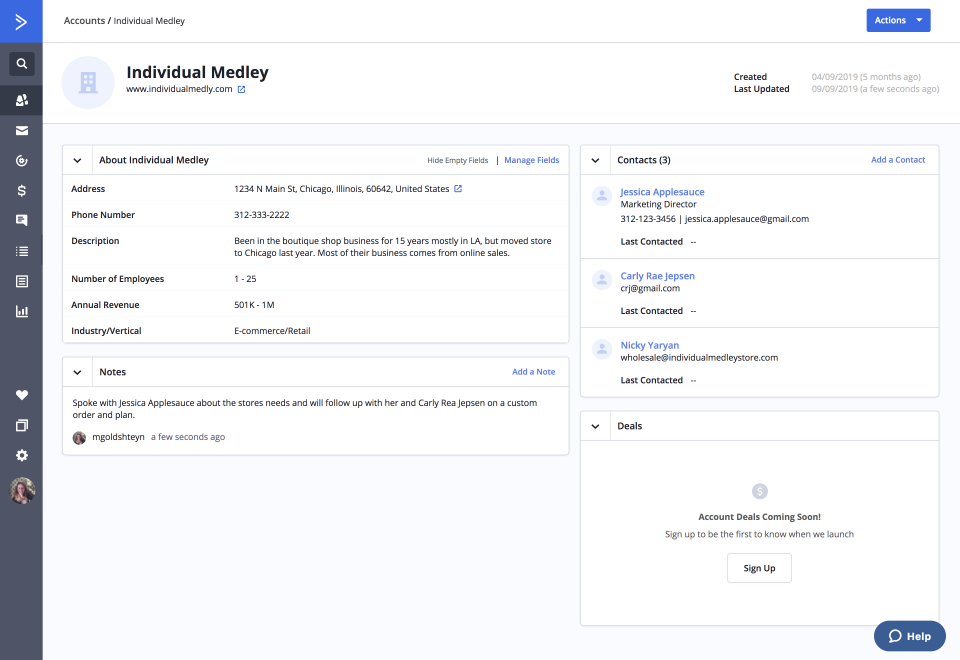 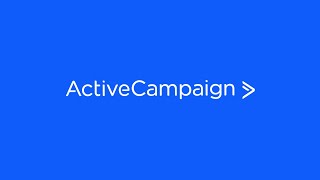 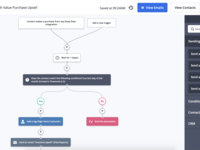 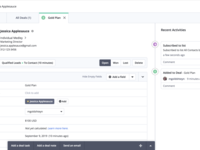 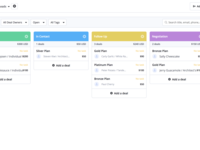 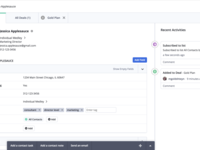 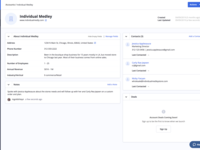 Pricing is determined by plan and by amount of contacts in the account.

(0)
BEST VALUE <ALL included for one low price> You don't need 4+ products to Market/ Sell/ Support just FBP & it's easier to use ! !
View Profile See Comparison

4,6 /5 (484)
Freshworks CRM is packed with features and a highly intuitive UI so that you don't have to juggle multiple tools to run your business.
Learn more about Freshworks CRM
Visit Website See Comparison

Founder
Marketing & Advertising, Self Employed
Used the Software for: 2+ years

"This guys know how to do things the right way"

Pros: Instead of boring the hell out of you making a long list of all the things I like about AC, I would resume them in just 3 "little" things I care of: - Reputation: They REALLY care about sender reputation. And, you know... an email that doesn´t get to my suscribers is like loosing money out of my pocket. So, I´me really happy the way they´re handling things on this department - Ease of use + functionalities: Most other services only offer one of them things. But I want them all. AC covers all my needs regarding this issues (and I´m a choosy guy, you know). - It´s scalable!: This is a biggy. As your businees grows, you´ll have a new set of needs when it comes to automation. AC scales as your business thrives so you don´t have to switch companies never again.

Comments: We are using Mailblue, which is a certified partner of ActiveCampaign and makes their software available in my native language and with Dutch support. This makes it quite easy to get support when you need it. We were looking for a tool with e-mail, automation and lead scoring features. As we didn't have any in-house knowledge about these (especially the tools), I've done some research. ActiveCampaign came out as the tool with the best functionalities for the best price (through Mailblue). This made me decide to start a demo, and eventually get the software. So far, it does exactly what I need and at this time it doesn't cost me a lot of time to figure out how to use it. The only thing is we currently don't really use the lead scoring mechanism as it needs a lot of tweaking (on our side). But as all other features are working really well for me, we're still happy users of the software.

Pros: The flexibility of the tool is something I really like. It's quite easy to use your own email templates, which are (as long as you keep it simple) completely adjustable as well as responsive. Besides that, the automation part is working like a charm. By using your own tags and fields you can practically do anything you want.

Cons: I am still trying to figure out how to set up a link with our current CRM. As ActiveCampaign has their own CRM built in, this is not one of the key futures. For our business however, we only use ActiveCampaign for the e-mail marketing and automations (so only the marketing department is using this tool). The entire company is built on the use of our CRM, so we'd like to see all of the ActiveCampaign data on there for a complete report.

Pros: The most critical thing a small business has is their customer list. Being able to communicate with your clients in a timely manner, whether it's regarding safety protocols to build confidence or a promotion/offer to increase revenue. An email marketing system that can properly segment your clients and make it through email filters can make the difference between success and failure in a small business. Activecampaign allows solopreneurs and small companies to compete with big companies when it comes to email marketing, lead tracking and relationship management at a very affordable price. Also, their premade 'recioes' (marketing automations) are such a help so you don't start from scratch.

Cons: There is a learning curve an best practices when starting up. Learning how to create a campaign or even the terminology that Activecampaign uses. However, they make it easier with a wealth of articles, how-to's, webinars, and live support (which is crazy good and fast!).

Founder
Marketing & Advertising, Self Employed
Used the Software for: 2+ years

Pros: Activecampaign sets the bar for building automations, with great sorting and filtering features including customer records, tags, lists, conditional rules/routing, e-commerce data such as purchases, crm pipelines and even a custom event layer. We have created very complex integrations for dozens of businesses ranging from E-Commerce stores, to Gyms to local businesses. It's really simple to learn and use, and powerful enough to tackle even the most complex business processes. This includes in-store purchases on a POS to sending out emails or automation's based on purchases or LTV. It also supports multiple E-Commerce platforms natively, but be aware those features are nearly 4x the price to unlock after the trial.

Cons: After months of issues that resulted in one of our clients losing an excess of $40,000 in revenue, we can no longer recommend activecampaign. Poor support was to blame for this issue, with it being impossible to get someone on a call even though we pay 6 figures a year for service. Activecampaign is growing really really fast. Because of this, They have pretty terrible support and there are also long-standing bugs that they seem to have no intention to fix. For instance, the system is supposed to generate previews for each automation's email steps and in various other places, but instance shows a broken image. We have inquired about this to the support to be told they are aware it's been broken for over a year and have no ETA or intention on repairing it. We have this problem on all our client's accounts(dozens), and it's a serious issue with UI/UX but they don't seem to care. There are also some major logic issues, such as if you filter an automation to show anyone with 0 purchases, it doesn't work. We also inquired about this but got another non-response... So basically, where it works, it works well but there are a few major issues and they don't seem intent on repairing them, even though they are steady releasing more features to add to their pricing tiers. Overall, it's hard to find another system that provides the ease of use, features, and value of activecampaign but the support and existing bugs are a nasty/necessary compromise.

"If I had to recommend a single email marketing and automation tool, it's AC"

Comments: AC has helped my business and clients alike in being able to seamlessly create email marketing campaigns regularly. In addition, the automation features are helpful to be able to tag specific contacts, start/end automated email series, and so on. There are limitless possibilities, without a *need* to use every feature to make it worthwhile.

Pros: AC provides the best combination of possibilities (features), user experience (ease of use), and pricing (it's affordable!).

Cons: There are situations when you may want a tool that is at the "enterprise" level (e.g., Salesforce) that may provide more options and span more actual product lines. I think it's very situational. But for specifically email marketing and marketing automation for small to mid-sized businesses, AC almost always is a more desirable fit than other platforms considered (e.g., more opportunity provided than MailChimp, all-around better than the terrible system that is ConstantContact, etc).