Paychex Flex is an ideal payroll and HR solution for small and midsize businesses in a variety of industries, including retail, professional services, food service, manufacturing, and construction.

What Is Paychex Flex?

Paychex Flex is an all-in-one Payroll & HR solution that you can build on as your business grows or changes. Use it to run payroll and integrate your HR administration, retirement, and insurance management with service the way you want it and our expert knowledge of the regulations that could affect your business.
Get 3 months of free payroll for a limited time. Click the link to get the details. 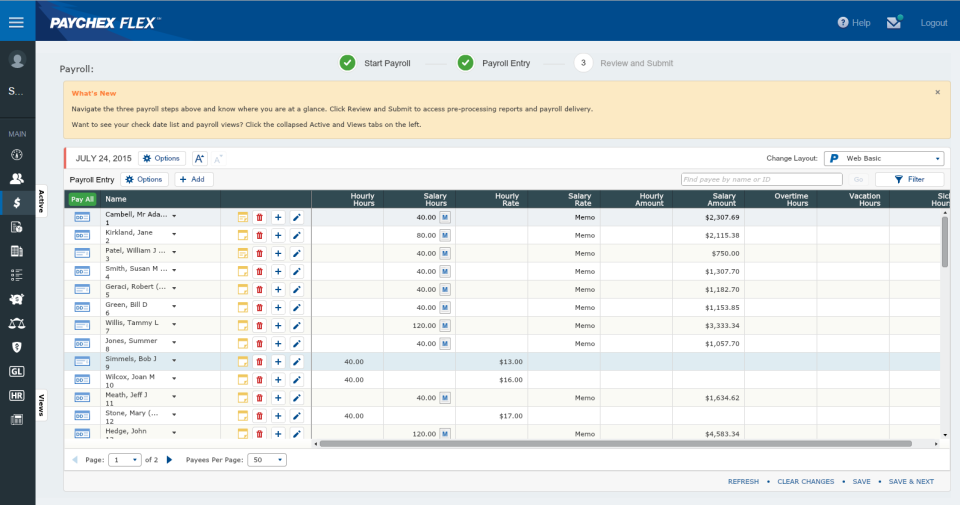 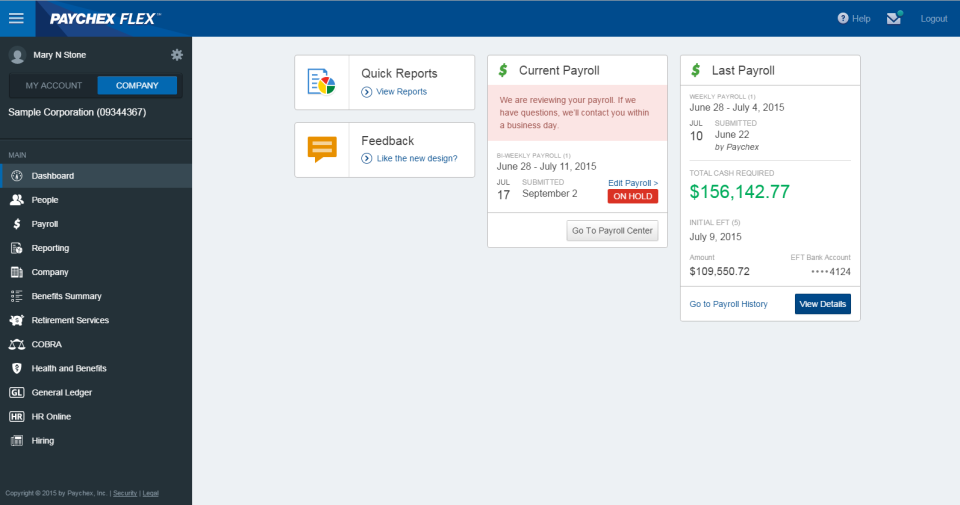 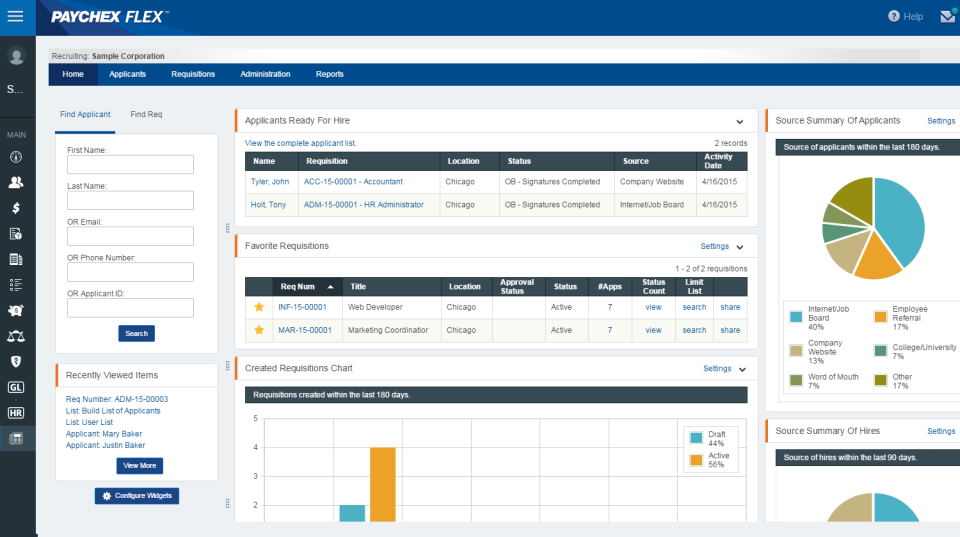 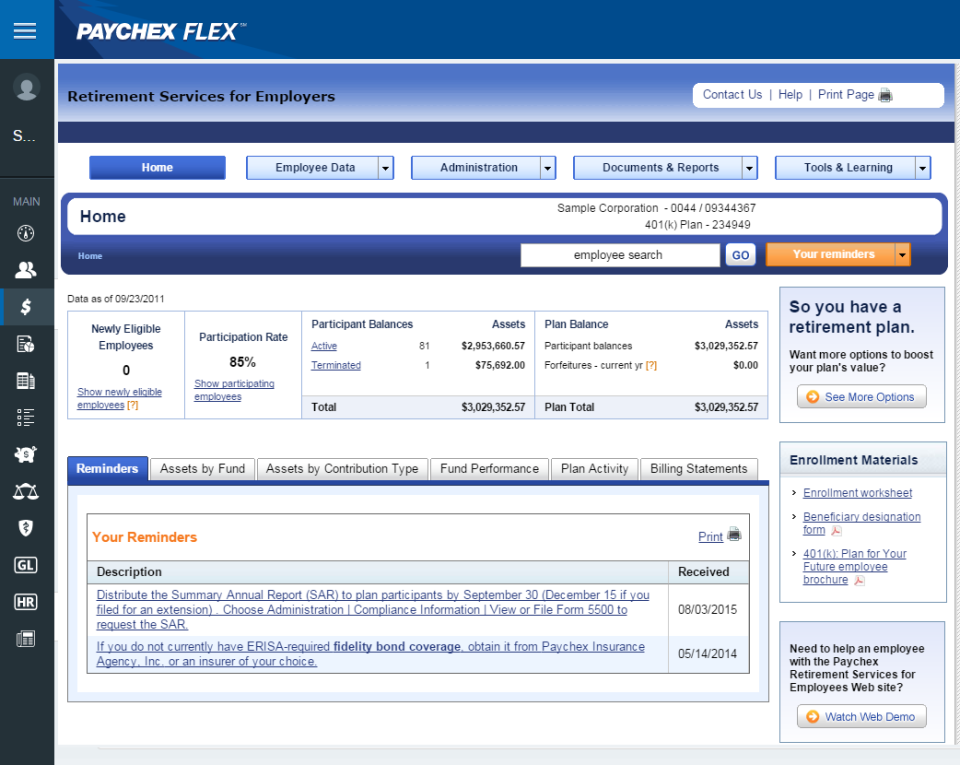 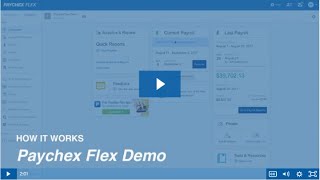 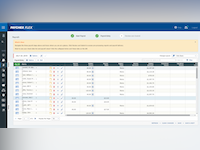 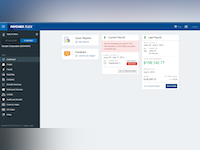 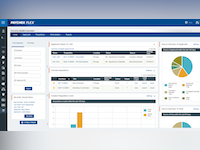 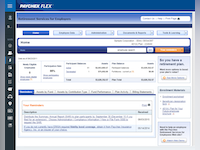 4,5 /5 (90)
Factorial streamlines HR processes for every stage of the employee life cycle so HR can focus on what really matters.
View Profile See Comparison

4,3 /5 (491)
WebHR is everyone's favorite and a global leader in Cloud HR - Helps you manage the most important asset in your company - your People!
View Profile See Comparison

4,3 /5 (100)
Easy to use, scalable, and comprehensive HR software for businesses of all sizes. Pay only for the modules you use.
View Profile See Comparison
Previous Next
More Paychex Flex alternatives

"Calm in a sea of changing regulations"

Comments: We had considered hosting our own payroll, however, with the craziness of COVID and regulations we are very happy we chose a partner provided and supported solution. Saves us time chasing new regulations and forms and the dreaded amendments.

Cons: At times its so complete it can be overwhelming to find some less used features you had found before. Again they are all like this but the customer support makes this a breeze as you can actually talk to a human being that listens and helps.

Pros: The system was friendly to use and easier to do payroll when you were ready.
There wasn't constant updates every day and you were assigned a representative to assist you with any issues.

Cons: Sometimes you run into an issues and your representative is out of the office you may get someone else who is not aware of the issue.

"PREVIEW was a great payroll work horse. But beware, FLEX Payroll is no PREVIEW."

Comments: We've been on Paychex PREVIEW payroll software for 16 years. It was a solid no non-sense payroll processing work horse which came with everything you'd ever need to process payroll for 100+ employees in a very quick and efficient manner. PREVIEW software was extremely well designed and well thought out. The developers took the perspective of payroll processing users and provided all the navigation speed, functionalities and reports that we'd ever find useful or need to do our jobs quickly and efficiently. There were hardly any unnecessary clicks, keystrokes or scrolling to speak of. It exceeded my expectation all these years. Paychex's golden era and reputation as payroll processing leader was probably due to these sensible legacy products. Like all good things which must come to an end, we were switched to FLEX Q2 of 2016 because PREVIEW was so old that Paychex decided to sun set it this year - which was totally understandable. But any reasonable PREVIEW clients would also expect and assume that whatever good features, good functionalities and useful reports that were available and had been working well in PREVIEW would be brought over and be available in the new payroll product as well. Not so. Enters FLEX which Paychex touted as being technologically advanced, etc. It probably is. But as far as FLEX payroll processing features and functionalities are concerned, I am actually set back 16 years to a payroll processing product that seemed Beta, very slow, cumbersome, awkward - compared to PREVIEW. Paychex simply threw PREVIEW out the window and started fresh from scratch with FLEX. I spent my first several months on FLEX Payroll sending them suggestions to make FLEX "better". I don't know if anyone cared. FLEX Payroll screen designs and navigation are very slow, very cumbersome, and very awkward. What I considered "speed features" in PREVIEW were non-existent in FLEX. Fields are spread out as far apart as they can find room to spread them out to (instead of keeping the screen layouts compact) seemingly so as to "maximize" unnecessary clicks, scrolls and keystrokes as much as possible. It's also more cumbersome and time consuming just to get information and reports from FLEX Payroll which could be run quickly and easily before in PREVIEW. I felt like I'm using payroll software designed by inexperienced college graduates who had never processed payroll before in their lives. They're out to get as much of my time make me do as much work as possible for the same amount of work that I have to do as before - to see where my breaking point is. So overall, I'm not impressed. To me, if the basic payroll processing functionalities are less than before, FLEX Payroll will still be inadequate despite all other "great features and modules" they added to FLEX which I don't need.

Pros: Flex integration with Benefits Administration (Benetrac) module can make life a lot easier for some - but Beware - only if your group is 100+ enrolled. Our Paychex sales rep did make the claim that with Benetrac service, our medical insurance transactions "will all be automatic with carriers and we wouldn't have to do a thing" - which was totally not true. As it turned out, more carriers than not do not do EDI for groups (company) with < 100 enrolled. So the main FLEX selling point totally didn't even pan out for us. Please learn from our lesson. Do verify specifically that your medical and dental carriers will do EDI for your group before signing up for Benetrac.

Cons: Although FLEX does its job as payroll software, having been on a faster and more efficient product before, we know how much more time we are spending on this "more inefficient" product compared to before. Oh and please save yourself the headaches and trouble by passing on other Paychex's services. We tried Paychex Health Insurance and ACA filing. They both failed miserably. Same story in both cases. Can't get hold of the account rep and customer service rep. No one would answer or return our calls. Last year's ACA were 60% wrong after I've redone and resubmitted data 3 different times after 3 different CSR told me 3 different things. They were just making it up as they went. Very frustrating.

"Best decision we every made"

Comments: They have helped me to ease up my role in the payroll process and they have set us up on five recruitment boards to help us find employees and the whole hiring process is so easy and I don't have to be so hands on through the process.

Pros: The hiring/onboarding piece is amazing.
They set us up in less than 3 days and had us doing our first payroll within a week. They sat with us through the whole payroll process from start to finish to make sure we understood it all.
The Time and attendance piece is awesome and works so well for our staff

Cons: There is nothing we don't like about Paychex. It has met our expectations and continues to do so daily.

Comments: It's a good product for a small to medium size company. Again, my review is from a user standpoint, not an administrator. I really have no negative remarks for Paychex Flex.

Cons: From a user standpoint, nothing really.